We were unable to upload your file. Please ensure your file is 10MB or smaller in size.
Thank you for your message or article about your trips! 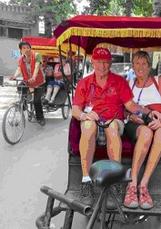 by Carol and Steve Russell   September 2015

Carol and I, members of the PLBC,  joined an excursion to China the spring of 2015 with 32 others for 12 days touring 5 cities with 2 in country flights.  We started in Beijing, once known as Peking, visiting Tiananmen Square, the largest public square in the world.  We toured the Forbidden City, a 250-acre complex of palaces, pavilions, courtyards, gardens and the Summer Palace, the creations of the royal emperors over many dynasties. The Great Wall, also known as the long wall, which is the world’s longest man-made structure, stretching 3,948 miles is truly an incredible accomplishment. The 2008 Beijing Olympic Games show cased the modern facilities including the Bird’s Nest main event theater and Water Cube swimming center.  A 3 hour flight brought us to Xian, an ancient city in the geographic center of China and the home of the Terracotta Warriors. Discovered 40 years ago, this army of more than 6,000 life-size terra cotta soldiers models, guarded an emperor’s tomb that remained hidden for more than 2200 years.

Another 3 hour flight brought us to Shanghai; we were transferred to Suzhou by coach immediately. In Suzhou, we visited a traditional Chinese garden, a silk spinning mill and the 1400 year old Grand Canal, which runs for 1200 miles. In Hangzhou, the Heaven City, we had a boat tour on the West Lake, surrounded by numerous temples, pagodas, gardens, and artificial islands within the lake. In 2011, it was designated a UNESCO World Heritage Site for having "influenced garden design in the rest of China as well as Japan and Korea over the centuries".

We drove to Shanghai, our last stop in China. As the largest city in China and an economic, commercial and financial center, Shanghai is the symbol of China’s ambition and future, and a relatively young city. No other city we visited was more dynamic, fascinating and has such a unique colonial past. The Bund, a waterfront promenade on the Huangpu River featured landmark neoclassical buildings of European style, built over the last 200 years. However, the glitzy Pudong New District featured super-sized neon-lit sky scrapers, built over only the last 30 years.  Everywhere we traveled on our bus on Chinas ultra-modern tree lined highways, with flowered medians, we saw mostly new high end new vehicles. We had an opportunity to ride on the Maglev, the world’s fastest high speed train (267 miles per hour), the 19 miles to Shanghai international airport for our flight home, but we declined. As you can see, we did really enjoy our rickshaw ride instead. China is a huge country, with 1.3 billion people, that has both a capitalist and socialist system that seems to be working for them in the present. China is a study of contrasts of the old and modern. The people are hard-working, ambitious, and hopeful of progressive change. They have accomplished so much already.